Source: Occurs naturally in rocks and minerals. Banned for use as a pesticide, it is currently imported to the US for uses in photocells and electronic devices.

Summary: Thallium is element 81 on the periodic table. The metal was first discovered in 1861. It has a density of 11.8 g/mL. It occurs naturally in rocks and minerals. The pure form of thallium oxidizes rapidly and has few commercial uses. It is a very toxic substance that has been the culprit in a few intentional poisonings. For this reason it was used as a rodenticide in the United States up until its ban in 1974. Thallium has been imported to the United States since production halted in 1984. Its uses currently reside in photocells and electronic devices. 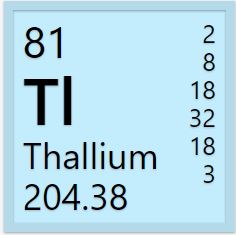