Source: Occurs naturally in rocks and minerals. It is used as a light source in vapor lamps, as an additive in gasoline, and to strengthen alloys. It is used in organic synthesis and is well known for forming an ionic bond with chloride to form table salt.

Summary: Sodium is element 11 on the periodic table. It is a member of the alkali metals and it is found naturally in rocks and minerals such as sodalite. It has a density of 0.968 g/mL at 20 C. Sodium is a highly reactive element that is highly flammable when exposed to water. Sodium vapor is used in buildings to produce efficient but harsh lights. Sodium may be most famous for its bond with chloride, commonly called table salt. It is an essential nutrient that humans require. Other compounds create known chemicals such as lye, baking soda, caustic soda, and borax. Sodium is important in organic synthesis. It is used to strengthen alloys, as an additive in gasoline, and may be used as a cooling source for nuclear reactors. 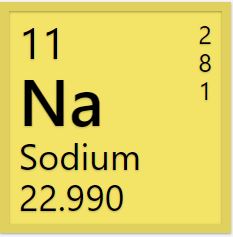