Source: Occurs naturally in rocks, minerals, and soil. It has applications in electronics as a semiconductor and rectifier. It is also used in solar cells for its light-sensitive properties that produce electricity. Selenium is also used in the production of pesticides and pharmaceuticals.

Summary: Selenium is element 34 on the periodic table. It has a density of 4.809 g/mL and was discovered in 1817. It is an essential element that all life forms require for survival. Selenium is used in photo and solar cells for its photovoltaic and photoconductive properties. As a semiconductor it is used in electronics and solid state devices. It is also able to convert AC to DC electricity. Selenium is also used in the production of pharmaceuticals and pesticides. It is found naturally in rocks, minerals, and soil. 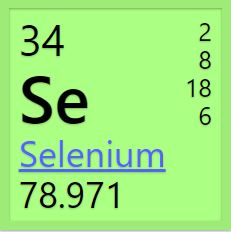