Source: Occurs naturally in minerals and is found in plumbing systems. Corrosion of lead pipes is the main source of lead contamination in water. Ammunition is also a source of lead in natural water systems such as wetlands.

Summary: Lead is element 82 on the periodic table. It has a density of 11.34 g/mL at 20 C. It is found in rocks and minerals, such as galena. Lead has been used in many applications for thousands of years. It has been the choice of material for plumbing pipes because it is strong, malleable, and resistant to corrosion. Over time, lead may leach into the water these pipes carry, potentially polluting drinking water supplies. The density of lead has made it a common ammunition source. Lead may pollute wetlands where trapshooting is common. Lead is used to shield patients from x-rays and gamma rays in medical procedures. It may also be used in radioactive waste shielding to prevent environmental contamination. It is common in electrical devices such as batteries, and soldering is a technique that utilizes melted lead and tin to bond metal pieces. It is also used in to form alloys with many metals. Lead was formerly used in paints in households, and as an additive in gasoline. Fun fact: Lead may be mistaken for graphite in pencils as graphite is also known as plumbago, while lead may be referred to as plumbum. 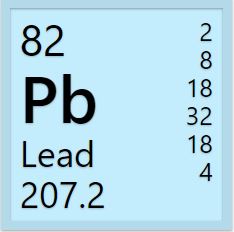