Source: Occurs as a byproduct of petroleum purification processes. It is also used as a disinfecting agent on food and may be used as a food additive. The compound has many industrial and manufacturing applications.

Summary: Hydrogen sulfide is an inorganic compound that contaminates water from natural and synthetic sources. It is produced as a byproduct of petroleum purification and is used as a disinfecting agent on crops and food. It is found in the natural world in unrefined petroleum, volcanic emissions, and exists in groundwater. It may be produce naturally where sulfates and organic compounds containing sulfur have been reduced by bacteria, or it is produced synthetically in the process of making other chemicals containing sulfur. It may also be used as a food additive, and has many industrial manufacturing applications. It is a toxic gas at room temperature that smells of rotten eggs. It is soluble in water up to 3980 mg/L at 20 C and has a vapor density greater than air. It has two acid dissociation constants of pKa(1) = 7.04 and pKa(2) = 11.96. Volatilization, biodegradation, and oxidation are the main methods or natural degradation in water and soil. 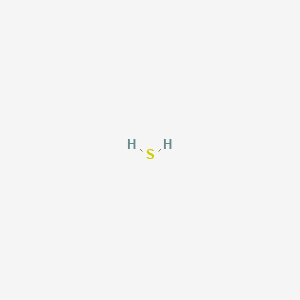