Source: Occurs naturally in rocks and minerals. It is used extensively in pipes, electrical wiring, and alloys such as bronze and brass.

Summary: Copper is element 29 on the periodic table. Copper occurs naturally in rocks and minerals and may be consumed by all life forms in low amounts that are non-toxic. Copper has a wide range of applications that date back to 9000 BC. When combined with zinc it creates brass, and when combined with tin it forms bronze. It has many uses in jewelry, creating metal alloys (such as brass and bronze previously mentioned) and may be useful in metal plating. Pennies made in the United States were made from copper until 1982. Copper is strong and malleable and is used extensively in plumbing applications such as pipes. If these pipes corrode over time they may leach copper directly to the water supply. Despite this, copper is also used in a water treatment process aimed at removing and preventing legionella. The process is called copper silver ionization. It is also used for its high electrical conductivity, and it is used extensively in electrical wiring. Another attribute that makes it sought after in the medical industry is its antimicrobial properties for use in creating sterile surfaces. Copper has a density of 8.94 g/mL. 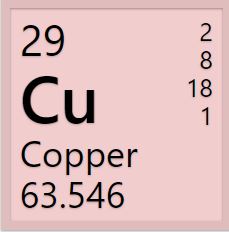