Source: Used as a solvent and intermediate in organic polymers and synthesis.

Summary: An isomer of 1,2-dichloroethylene, cis-1,2-dichloroethylene is used as a solvent and as an intermediate in polymers and organic synthesis. It may exist as an environmental degradation product in landfills from chlorinated compounds such as trichloroethylene (degraded by microorganisms). It exists as a liquid at room temperature and has a solubility in water of 6410 mg/L at 25 C and has a density of 1.2837 g/mL at 20 C. Upon decomposition it produces chloride gas. It exists in the atmosphere in the vapor-phase where it has half-lives ranging from 180-240 days undergoing reactions with ozone and nitrate radicals. A Koc value of 49 indicates high mobility within soil, and weak adsorption to suspended solids within water. Biodegradation from soil produced half-lives of 17 and 25 days while biodegradation within water had half-lives of 36 and 47 days. Anaerobic biodegradation is expected to be a major natural removal process for groundwater. Volatilization is a major fate process in soil and water. 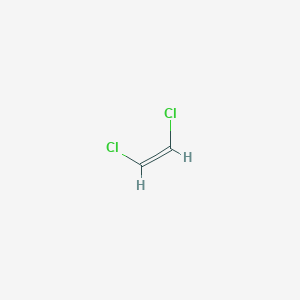