Source: Used as a solvent and in fire extinguishing fluids.

Summary: Bromochloromethane is produced naturally by algae in the ocean. It is commercially produced as a solvent and chemical intermediate and is used in fire-extinguishing fluid. It exists as a colorless liquid at room temperature and is soluble in water up to 16,700 mg/L at 25 C. It has a density of 1.9344 g/mL at 20 C. In the atmosphere bromochloromethane exists as a vapor. It will be degraded by photochemical reactions and has a half-life of 108 days. Bromochloromethane may be destructive to the ozone layer. A Koc value of 22 indicates high mobility within soil. Volatilization from soil and water is expected to be a major fate process. 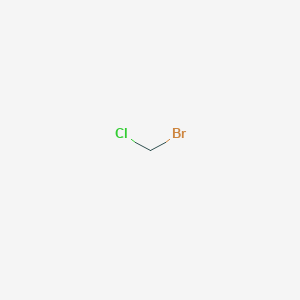