Summary: 1,2,4-trichlorobenzene is an organic compound used as a solvent and chemical intermediate. It was formerly used as a pesticide but is now only used as an intermediate in the production of pesticides. It also has applications as a degreaser and lubricant. It is soluble in water up to 49 mg/L at 25 C and has a density of 1.459 g/mL at 20 C. Upon decomposition it produces hydrogen chloride gas. A biological half-life of 15.85 days was measured in fish. The compound is classified by the EPA as a Hazardous Air Pollutant (HAPs). It exists in the atmosphere as a vapor and is degraded by photochemical reactions with a half-life of 30 days. Volatilization from soil and water is expected to be the major fate process. Bioaccumulation is expected to be high. 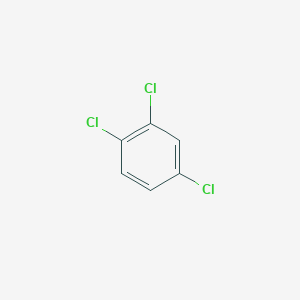