Summary: Zinc is element 30 on the periodic table. It is a metal and has a density of 7.133 g/mL at 20 C. Zinc occurs naturally in rocks and minerals. Zinc is used heavily in coating other metals such as iron to protect them from rust. This process is known as galvanizing, and it protects iron and other metals from rust because the zinc that is electroplated will rust earlier than the metal, but will prolong its use by shielding it from exposure to oxygen. Zinc oxide is an important compound used in rubber, paints, cosmetics, pharmaceuticals, plastics, soap, batteries, and electronics. Zinc sulfide is another important compound used in television screens, fluorescent lights, and luminous dials. Zinc is used in die casting, batteries, and forms many important alloys. Zinc is used in brass and solder. It is also used in pennies, becoming the dominant metal used in pennies over copper after 1982. This switch from majority copper pennies to zinc was due to the rising price in copper compared to the decaying value of the penny. Zinc is an essential nutrient required by humans and animals. 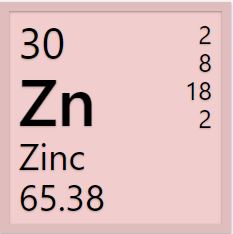