Source: Occurs naturally in minerals and rocks. Used in nuclear weapons, and is used in nuclear fuel reactions to produce energy.

Summary: Uranium is element 92 on the periodic table. It is very dense at 19.1 g/mL. It is naturally occurring in minerals and rocks in the crust of the earth, mainly forming compounds with oxygen. Erosion of these deposits may cause contamination of water sources. The three most common isotopes of uranium are uranium-234, uranium-235, and uranium-238. Uranium-238 is the most abundant and stable with a half-life of approximately 4.5 billion years. All isotopes of uranium undergo radioactive decay to produce radiation and other elements. Uranium has been used in ammunition to create harder bullets, and uranium-234 was the culprit of the atomic bomb dropped on Hiroshima during World War II. Uranium-235 is an important isotope because it is used in nuclear fission reactions to produce energy. Uranium-238 may capture a neutron and undergo beta decay to become plutonium-239, an isotope used in chemical weapons and in nuclear fuel reactions. Uranium was formerly used in glazes, plates, and glassware commonly found in households and buildings. 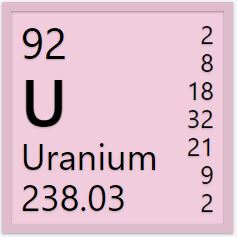