Summary: Tritium, also known as hydrogen-3, is a radioactive isotope of hydrogen. It forms from reactions of hydrogen and cosmic rays in the atmosphere. Its nucleus is comprised of one proton and two neutrons and decays to produce helium-3 and a beta particle. The half life of tritium is approximately 12.5 years. Tritium is heavier than deuterium and hydrogen. Similarly, it reacts with oxygen to form T2O which is known as tritiated water. Tritium is used in nuclear energy and weapons, and is used in emergency light fixtures as a source of light in the instance of power failure. May also be used as an environmental tracer. 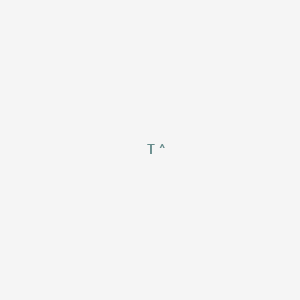