Source: Many industrial and construction uses. Primarily used in aerosols and refrigerants which have long-lasting environmental effects.

Summary: Trichlorofluoromethane has many industrial applications. It may be used as a solvent, in the production of fire extinguishers, and it was formerly used as a propellant in pesticides and cosmetics. It also has many uses in construction and refrigerants. It exists as a colorless liquid at room temperature and is soluble in water up to 1100 mg/L at 25 C. It has a density of 1.494 at 17.2 C. Upon decomposition it produces hydrochloric and hydrofluoric acid. Trichlorofluoromethane is very persistent in the atmosphere with a troposphere half-life of 52-207 years. Photolytic reactions in the stratosphere produce free chlorine that is highly destructive to the ozone. The compound may also exist as a natural emission product from volcanoes. A Koc value of 16 indicates high mobility within soil. Volatilization from soil and water is expected to be a major method of natural removal. 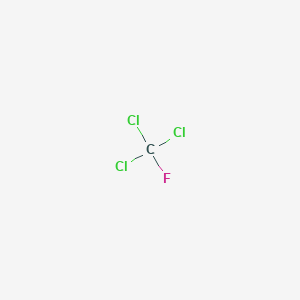