Source: Formerly used as a pesticide to control insects on crops and kill invasive species of fish.

Summary: Toxaphene is a chemical created synthetically by chlorinating a chemical called camphene. The resulting toxaphene chemical is an organic compound formerly used as a pesticide. It had seen extensive use in agriculture from the 1970s and 1980s before it was banned for use as a pesticide in 1983. It had been used to control insect populations and kill invasive species of fish. It has a solubility in water of 3 mg/L and has a density of 1.65 g/mL at 25 C. The compound is classified by the EPA as a Hazardous Air Pollutant (HAPs). Volatilization and photolysis from soil and water are expected to be major fate processes. Bioaccumulation in organisms is very high. 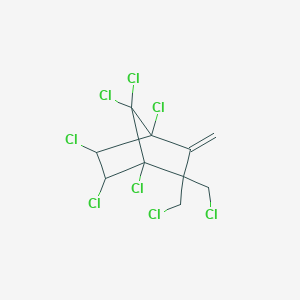