Source: Formerly used as an herbicide, currently banned in the United States and the European Union.

Summary: Nitrofen is a compound formerly used as a herbicide. It was banned by the United States in 1996. It has a solubility of 1 mg/L at 22 C and decomposes to produce toxic fumes of hydrogen chloride and nitrogen oxides. The substance will decompose before melting. 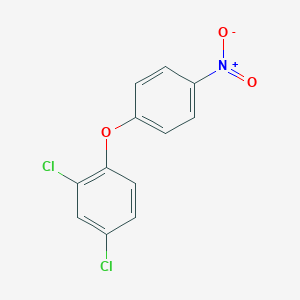