Source: Used as a pesticide on a wide range of crops.

Summary: Methoprene is a compound used as an insecticide. It is classified as an insect growth regulator (IGR) and has been used to control mosquito populations. It also has uses in the tobacco industry. It has a solubility in water of 1.39 mg/L at 25 C and a density of 0.9261 g/mL, making it less dense than water. It is a clear to pale yellow liquid that is notable for a weak fruity odor. In the vapor-phase it is degraded by photochemical reactions involving ozone. A Koc value of 5300 indicates low mobility within soil but higher adsorption to suspended solids in water. 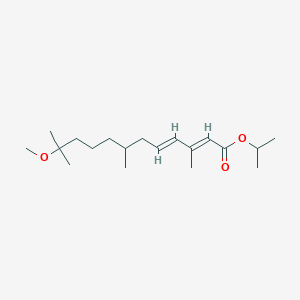