Summary: Hexachlorobenzene currently has no commercial uses in the United States. It was formerly used as a pesticide, chemical intermediate, and had applications in the production of rubber, fireworks, and wood preservation. Its occurrence as an environmental contaminant likely comes from its formation in the production of solvents and pesticides, but it is not selectively produced. It may also be produced due to incomplete combustion processes or as a leachate from waste. It is soluble in water up to 0.0047 mg/L at 25 C has a density of 2.044 g/mL at 23 C. Upon decomposition it produces gaseous hydrogen chloride. It has a biological half-life in fish of 275.42 days indicating that bioaccumulation in organisms is high. It is classified by the EPA as a Hazardous Air Pollutant (HAPs). As a vapor in the atmosphere it will persist with a half-life of 1.6 years. Very high Koc values indicate that hexachlorobenzene will be immobile in soil. Volatilization from water is expected to be a major fate process, but the compound is highly resistant to biodegradation. Hexachlorobenzene is expected to be very persistent as an environmental contaminant. 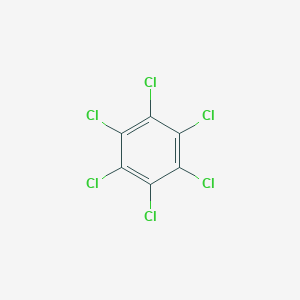