Source: Used as a pesticide to control insect populations on crops.

Summary: Fenitrothion is an organophosphate used as a pesticide to control insect populations. It is no longer used in the United States as a pesticide. It is a dark yellow liquid at room temperature and has a solubility of 38 mg/L at 25 C. It is expected to have low to moderate mobility within soil based on Koc values ranging from 254 – 1531. Biodegradation is expected to be the major source of natural removal from water and soil. 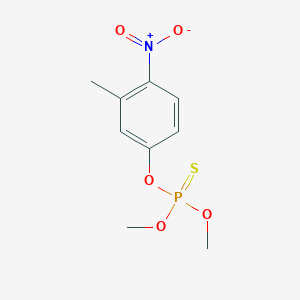