Source: Used as a fumigant pesticide. Other applications include chemical intermediate, solvent, sterilizing agent, and use in adhesives among other manufacturing processes.

Summary: Ethylene oxide is an organic compound used as a sterilizing agent and fumigant pesticide. It is also used as a chemical intermediate in organic synthesis for compounds such as ethylene glycol. Other uses include in detergents, adhesives, and it is used as a solvent. Ethylene oxide is classified by the EPA as a Hazardous Air Pollutant (HAPs). The compound exists in the gas-phase in the atmosphere with a half-life of 57 days. A Koc value of 2.2 indicates very high mobility within soil that may lead to leaching to groundwater. Hydrolysis may be an important fate process, and hydrolysis of ethylene oxide produces ethylene glycol. This environmental transformation product is susceptible to biodegradation. Volatilization and hydrolysis are expected to be the major fate processes in water and soil for ethylene oxide. 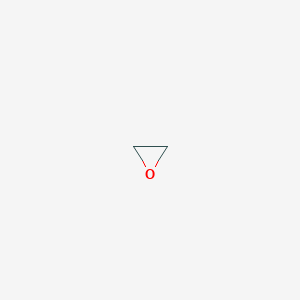