Source: Used today in the production of pharmaceuticals and resins. Formerly used as a pesticide and additive in leaded gasoline.

Summary: Ethylene dibromide (otherwise known as 1,2-dibromomethane) is an organic compound formerly used as a pesticide. It has been banned by the EPA for use as a pesticide since 1984. It may still see uses as an applied chemical in the logging industry to eliminate termites and other pests. It was also formerly used as an additive in lead-containing gasoline fuel. It is currently used as an intermediate in the formation of vinyl bromide, and has uses in the production of pharmaceuticals and resins. It is produced naturally in oceans by algae. It is soluble in water up to 3910 mg/L at 25 C and has a density of 2.16832 g/mL at 25 C. It is classified by the EPA as a Hazardous Air Pollutant (HAPs). It exists as a vapor in the atmosphere and undergoes degradation with a half-life of 64 days when reacted with hydroxyl radicals. Koc values ranging from 14 – 160 indicate high to very high mobility within soil. Volatilization from soil and water is expected to be a major fate process. Biodegradation is also expected to be important, and within water half-lives have ranged from 7 – 350 days. 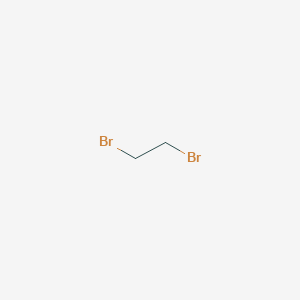