Source: Used in many industrial processes as a solvent and intermediate. Formerly used as a pesticide.

Summary: Dichloromethane has many applications ranging from its use in the removal of caffeine in coffee to uses as a solvent, paint remover, and refrigerant. It was formerly used as a fumigant on soil. It is classified by the EPA as a Hazardous Air Pollutant (HAPs). It exists as a colorless liquid at room temperature with a solubility in water at 13,000 mg/L at 25 C. It has a density of 1.3255 g/mL at 20 C. Upon decomposition it produces fumes of hydrogen chloride and phosgene which may be toxic upon inhalation. Dichloromethane exists in the vapor-phase in the atmosphere and will have a half-life of 160 days undergoing reactions with hydroxyl radicals. The chemical has been measured in samples of rainwater. Koc values ranging from 8 – 48 indicate high mobility within soil. Biodegradation and volatilization is considered an important fate process in both soil and water. 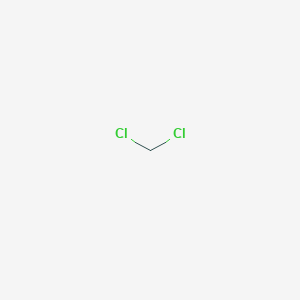