Source: Formerly used as a pesticide, today it is used in the synthesis of organic compounds.

Summary: DBCP is a synthetic chemical formerly used as a pesticide. Its use as a pesticide were banned in the United States as of 1985. It is produced today in the synthesis of organic compounds. It is a colorless liquid at room temperature that is soluble in water up to 1230 mg/L at 20 C. It is twice as dense as water at 2.08 g/mL. It is classified by the EPA as a Hazardous Air Pollutant (HAPs). It has a half-life in the atmosphere (vapor-phase only) of 37 days. Koc values ranging from 40-149 predict high mobility within soil. Volatilization is expected to be the major method of degradation in water and soil. 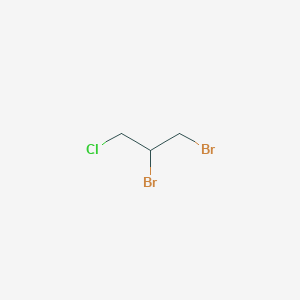