Source: Used as a pesticide on a wide range of crops. May also form in water as a byproduct of chlorination of water containing high amounts of organic matter.

Summary: Chloropicrin is an organic compound used as a fumigation pesticide. It has been banned by the European Union but still sees use in the United States. It may form in water as a byproduct of chlorination of water containing high amounts organic matter. It was formerly used in chemical weapons during World War I. It may see limited uses for its antimicrobial properties. It is a light yellow liquid at room temperature that is soluble in water up to 1620 mg/L at 20 C. It has a density of 1.6448 g/mL at 20 C. Upon decomposition it produces gaseous hydrogen chloride and nitrogen oxides. It exists in the vapor-phase in the atmosphere with a half-life of 123 days. A Koc value of 81 indicates high mobility within soil that may cause leaching to groundwater. Volatilization and biodegradation in soil and water are expected to be major fate processes. 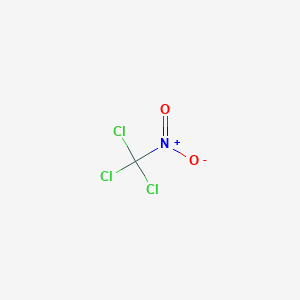