Source: Produced naturally in the ocean by algae. Restricted-use pesticide that has been phased out by the Montreal Protocol.

Summary: Bromomethane is an organic compound used largely as a restricted-use pesticide (as a fumigant). It is also used as a solvent and in the synthesis of other organic chemicals. It has been detected in emissions from organic combustion. It was formerly used as a refrigerant and in fire extinguisher foams. For these uses it is synthetically created but it is also produced naturally in the ocean by algae. It is soluble in water up to 15,200 mg/L at 25 C and has a density of 1.6755 g/mL at 20 C. Bromomethane is classified by the EPA as a Hazardous Air Pollutant (HAPs) and is an ozone-depleting substance (ODS). Use of bromomethane as a pesticide was to be phased-out by 2005 in the United States under the Montreal Protocol. As such, bromomethane largely occurs as an environmental contaminant from ocean interactions which produce a flux of 39 billion grams of bromomethane to the atmosphere per year. It exists in the atmosphere with a half-life of 1.5 years. Koc values ranging from 9 – 22 indicate high mobility within soil that may lead to leaching to groundwater. Hydrolysis and volatilization are expected to be the major methods of natural removal in soil and water. 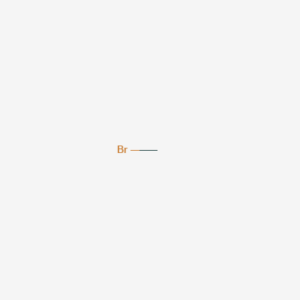