Source: Used as a plasticizer in many industrial and consumer products including PVC. Direct leaching from these products may result in environmental contamination. Contamination may also occur from industrial discharge streams.

Summary: Bis(2-ethylhexyl) phthalate, also known as DEHP, is a synthetic chemical used as a plasticizer. It is used in many residential, medical, and automobile products. It is primarily used in PVC. Plasticizers may such as DEHP may leach into the environment directly from the material they are in. Commercial uses have for DEHP have been declining with growing health concerns over its toxicity. It exists as a pale yellow liquid at room temperature with a density of 0.981 g/mL at 25 C. It is soluble in water up to 0.27 mg/L. It is classified by the EPA as a Hazardous Air Pollutant (HAPs). Upon contact with soil DEHP will be immobile based on Koc values ranging from 87,420 – 510,000. Biodegradation is a major fate process in groundwater with a half-life of 60 to 70 hours. 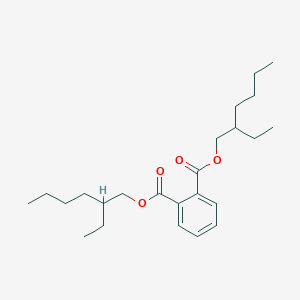