Summary: Benzyl chloride is a member of the substituted benzenes. It is primarily used as a building block in organic synthesis. Other uses include the production of cosmetics, pharmaceuticals, dyes, and it is used in the production of penicillin. It has been used as a chemical warfare agent in the past. The chemical is a colorless liquid at room temperature and has a density of 1.1004 g/mL at 20 C. It is soluble in water up to 525 mg/L at 25 C. Decomposition produces hydrogen chloride gas. Benzyl chloride is classified by the EPA as a Hazardous Air Pollutant (HAPs). It exists as a vapor in the atmosphere and is degraded with a half-life of 7 days. A Koc value of 100 indicates high mobility within soil. Benzyl chloride reacts quickly with water to form benzyl alcohol. This hydrolysis half-life has been measured at 15 hours. Volatilization and biodegradation are also expected to be major fate processes. 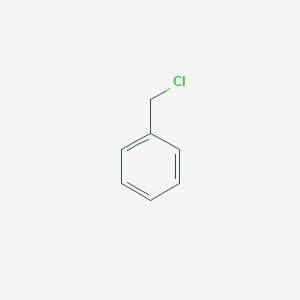