Source: Produced in large quantities for organic synthesis, benzene is also used to produce rubber, dyes, pesticides, and pharmaceuticals. There are many applications of synthetically-produced benzene, and it also occurs naturally in crude oil.

Summary: Benzene is an aromatic hydrocarbon that is produced in large volumes in the United States. It occurs naturally in crude oil and is used in petroleum purification and refinery processes. It is synthetically produced to be used in the production of rubber, dyes, pharmaceuticals, detergents, and various pesticides. Benzene is widely used as a building block in organic synthesis and is also used as a solvent. It exists as a colorless liquid at room temperature and has a density of 0.8756 g/mL at 20 C. It is soluble in water up to 1,790 mg/L at 25 C. The compound has a measured biological half-life of 6.00 days. Benzene is classified by the EPA as a Hazardous Air Pollutant (HAPs). It exists in the atmosphere as a vapor and will be degraded by hydroxyl radicals with a half-life of 13 days. Wet deposition in the form of rainwater may remove benzene from the atmosphere. A Koc value of 85 indicates high mobility within soil that may cause leaching to groundwater. Volatilization, photolysis, and biodegradation are major fate processes in water and soil. 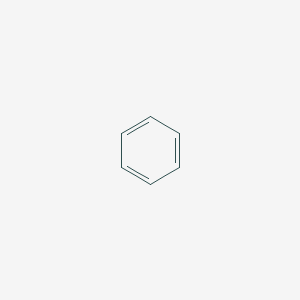