Source: Found naturally in minerals, it is used in transistors, solid-state devices, and pesticides. It may be added to livestock food in trace amounts.

Summary: Arsenic is element 33 on the periodic table of elements. It has a density of 5.778 g/mL at 25 C. Arsenic occurs naturally in minerals such as orpiment, realgar, and arsenopyrite. Erosion of these deposits may cause groundwater contamination. It naturally forms compounds with oxygen and may contaminate groundwater as arsenite (+3 oxidation state) and arsenate (+5 oxidation state). Arsenic occurs in both inorganic and organic form; the inorganic form is notoriously poisonous and has been used in insecticides and rodent poisons. It is used in solid-state devices and transistors, and is found in the pigment known as Paris green. It was formerly used for wood preservation, called CCA (copper chromated arsenic). The organic form of arsenic was formerly used in pharmaceuticals. It is used as a food additive for livestock in trace amounts. 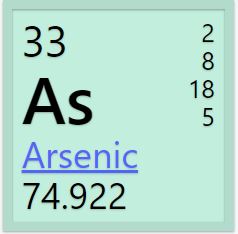